Happy day after Thanksgiving!  I hope everyone had a great day yesterday.  My celebration this year was on the smaller side.  We have had to cut it down the last couple of years because my dogs don’t behave well with so many people in the house.  We were a total of 12 this year and it seemed to work out fine.  We visited, ate well, and watched the New York Jets get their butts kicked by the NE Patriots!

The food was great.  My most recent Cravebox was full of things for Thanksgiving and believe me I used them yesterday. Every year I like to try something new as a side dish.  My dish this year was mashed cauliflower.  I was surprised – it wasn’t bad.  I am told I should substitute this for mashed potatoes to save on carbs, I might have to start doing that.

Black Friday officially started yesterday at 8 pm.  I find that Christmas is creeping up the calendar every year.  While I love Christmas and the holiday season as much as the next person, I don’t like having it shoved in my face the day after Halloween.  For that and other reasons, I never do Black Friday – especially when it now starts on Thanksgiving.  What used to be a holiday where you celebrated family and were thankful for what you had – you are now gobbling down your meal so you can be in line when the stores open at 8.  The whole idea of that just bothers me.  Christmas isn’t Christmas anymore.

OK – I will get down of the soapbox.  I may protest Black Friday, but that doesn’t mean I am going to give up on Christmas…  Instead of shopping, I decided to create.  I made a FB cover to celebrate Christmas – I liked it enough to turn it into a FB quick page.  There are two in the file one with “From My Family to Yours” and one without!  I hope you like it – enjoy the rest of your weekend! 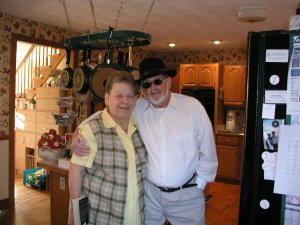 It was 5 years ago today that I (*we – see below) had to make the hardest decision of my life to date.  My beloved father was admitted to the hospital because his heart was not beating fast enough.  Shortly after he got to the hospital he coded.  They tried for a while to resuscitate him.  Eventually they intubated him and were able to get his heart beating again.  Little did we know it took over 5 minutes for this to happen.  All we knew was that he was alive and this brought joy.

Unfortunately this joy ended up to be short lived.  My father never really came back to us.  He subsisted on the ventilator for the next two weeks while we tried to get someone to tell us what was going on.  In the end they came back and said that he was probably without oxygen for too long and that he had brain damage and that  was why he could not get off the ventilator.

I had an event with my Dad during this time which I will always remember.  I was visiting him and I had my best friend with me.  He was his usual, mostly unresponsive self when we got there.  I had  a conversation with his doctors about where we needed to go.  He was coming up on 14+ days on the ventilator.  At this point they usually put the patient on a more long

term system and insert a feeding tube.  There were decisions to be made.  My friend and I were in his cubical (he didn’t have an actual room) chatting away.  His beloved Red Sox had just won the pennant again.  I brought him a championship hat and we chatted about the game like he was right there.

At some point he started to get agitated.  He hated the ventilator tube.  His random body actions would always be to pull that out.  I looked him the eyes at one point and said “you know I love you – right?”  to my surprise, he nodded his head.  Clear as day to me.  I had to look at my friend to confirm she saw the same thing.  I then said to him “you want that tube out, don’t you?”  He again nodded.  I cried.  Decision made.

From that point forward I knew that he did not want to go on this way.  Fortunately – my siblings knew that as well.  I come from a big family.  I have 9 siblings. To get us all to agree on something was nothing short of a miracle, but in this instance, we all knew what my Dad would have wanted.

This all takes us to 5 years ago today when we (I was his health care proxy, but this was a decision I would never make alone) made that decision.  They took him off the ventilator in the early evening.  I stayed at the hospital for a while, but I could not stay until he passed.  For me this was the passing of a man that I loved in a way I would never love another.  He was my hero, I could not watch him die.  My sisters were much better at this, so thankfully he was not alone.  To this day I have no idea how they did it – but I am glad that they could.

So tonight – I am saying good-bye to you again Dad.  You are missed more than you can ever imagine.  I love you!